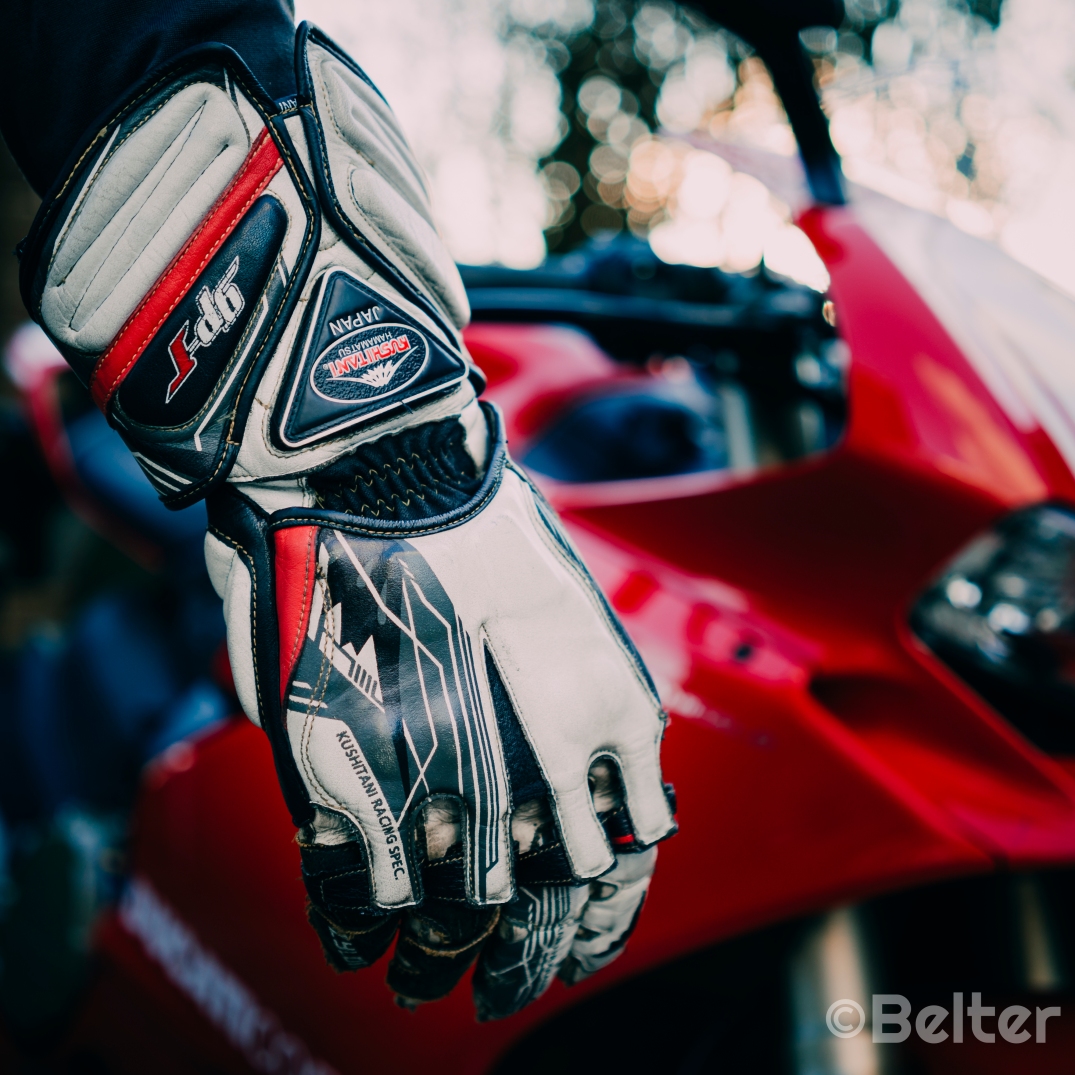 For me looking for Summer gloves had been an almost fruitless task. All I was searching for was a pair of gloves that I liked the look of. Had protection I felt I could trust and were so comfortable I would forget I had them on. Easy you would think?

I’ve owned all the usual suspects from the top brands. Alpinestars GP Pro, Dainese Full Metal Racer, Held Phantom, Racer and Knox Handroid. Whilst each pair had it merits there was always something I didn’t like about them. Whether the palm bunched up on trackdays, or the little finger rubbed on longer rides, I always seemed to be looking for a new pair of race gloves. I thought perhaps I’d engaged in an endless search for perfection. Perfection that might not exist because maybe i have stupid, odd shaped hands.

I say almost, because that changed a little over two years ago. One evening I noticed a tiny box in Fast Bikes magazine mentioning that legendary Japanese leather makers Kushitani now had a UK importer/retailer. I looked online at the Japanese Kushitani site. I was wowed with all the beautiful leathers and in particular their gloves. I got in touch with the new UK distributor and arranged to meet Jonny from Kushitani UK at the NEC bike show a few weeks later. He brought two pairs for me to try. One of these pairs were the GPR-6. I knew within seconds that i wanted a pair. Why?

Looks: On the GPR-6 Kushitani have taken a completely different approach to glove construction than any other race glove I have owned. They look different and I was an incredibly lucky boy and managed to get a pair of the white ‘special edition’ GPR-6s. Instead of mostly white they have a bit of design on the back of the hand. In reality it means less white to clean.

Comfort: As soon as i put my hand in the GPR-6 I instantly noticed the softness of the kangaroo leather palm. I even grabbed John McGuinness’s TT Fireblade clip-on just to check how it felt on the grip. No folding, no bunching. It was soft and supple. I was sick to the back teeth of gloves being comfortable off the bike and annoying whilst riding. The gloves I was wearing before I bought the GPR-6 caused me to pull in twice on a trackday as the palm kept bunching up. The right hand seemed to be stretching with no sign of stopping. I was fed up rolling off the throttle and using the grip to flatten the palm out again. Two years on and over 20,000 miles later the GPR-6 are still perfectly fitted around my finger and palms. Regular cleaning with Renapur has meant they are as soft as the day i got them.

Fit: Being Japanese the sizing is completely different to European manufacturers. However, speak to Kushitani UK and they can advise what size is suitable. One thing to note and something I never knew, is that Japanese people tend to have longer thumbs than Europeans. This is reflected in the fit. Lucky for me I have Japanese thumbs and mine fit brilliantly.

Feel: For me feel is important. I like to be able to feel vibration and feedback through my palms and fingers.  I was still riding my 675R when I bought these and I can still recall feeling the engine pulses in more detail the first time I wore these. I could feel things when cornering that I hadn’t felt before. Feedback that was completely absent from my previous pairs of gloves. Kushitani had also delivered them with some neoprene palm protectors to wear underneath when on track. These do nothing to dampen the overall feel of the glove and one thing that I noticed after a few trackdays is that my hands weren’t getting sweaty in them. They aren’t ventilated anymore than other pairs I’ve owned, so I think this is down to the quality of leather used.

Warmth: I will happily use these gloves most of the year. When it’s properly raining or gets to about 8 ˚C then I generally switch to my Winter gloves. They are well enough ventilated that my hands don’t sweat in Summer and don’t get cold in Autumn and early Winter. They can survive a shower without becoming saturated and on the few occasions I’ve been caught out on the way to work, they have dried by the time I’m heading home.

Protection: Kushitani don’t put any hard armour on the GPR-6. They cover the back of your hand and knuckles in six floating layers of their patented K-foam. Not too unlike a mini back protector for your hand. The thinking here being that it’s better to have something soft to absorb the force of crashing, rather than something solid like carbon, plastic or titanium that could transfer force through the glove to your hand or digits. I have a dent and a scar on a knuckle from a crash in gloves with an ‘exoskeleton’. Call it a different approach or philosophy but after my experience it’s something that I trust will work. The back of your wrist is adorned with a foam triangle to protect your wrist. It also features a lovely picture of Mount Fuji. The ring finger and little finger are covered in ‘Zylon’. It looks a bit like denim but is something like a kevlar weave and is designed to be abrasion resistant when sliding.

Price: Currently they are £189.95 delivered from Kushitani UK. This isn’t too dissimilar to any other top race glove. For the use I’ve got out of mine they’ve cost me less than 1p per mile. Someone from the seventies can probably tell you what that was in old money.

I think it’s safe to say I love these gloves and when these pair are past their best I’ll be buying another pair. Or whatever superscedes them in the Kushitani range. 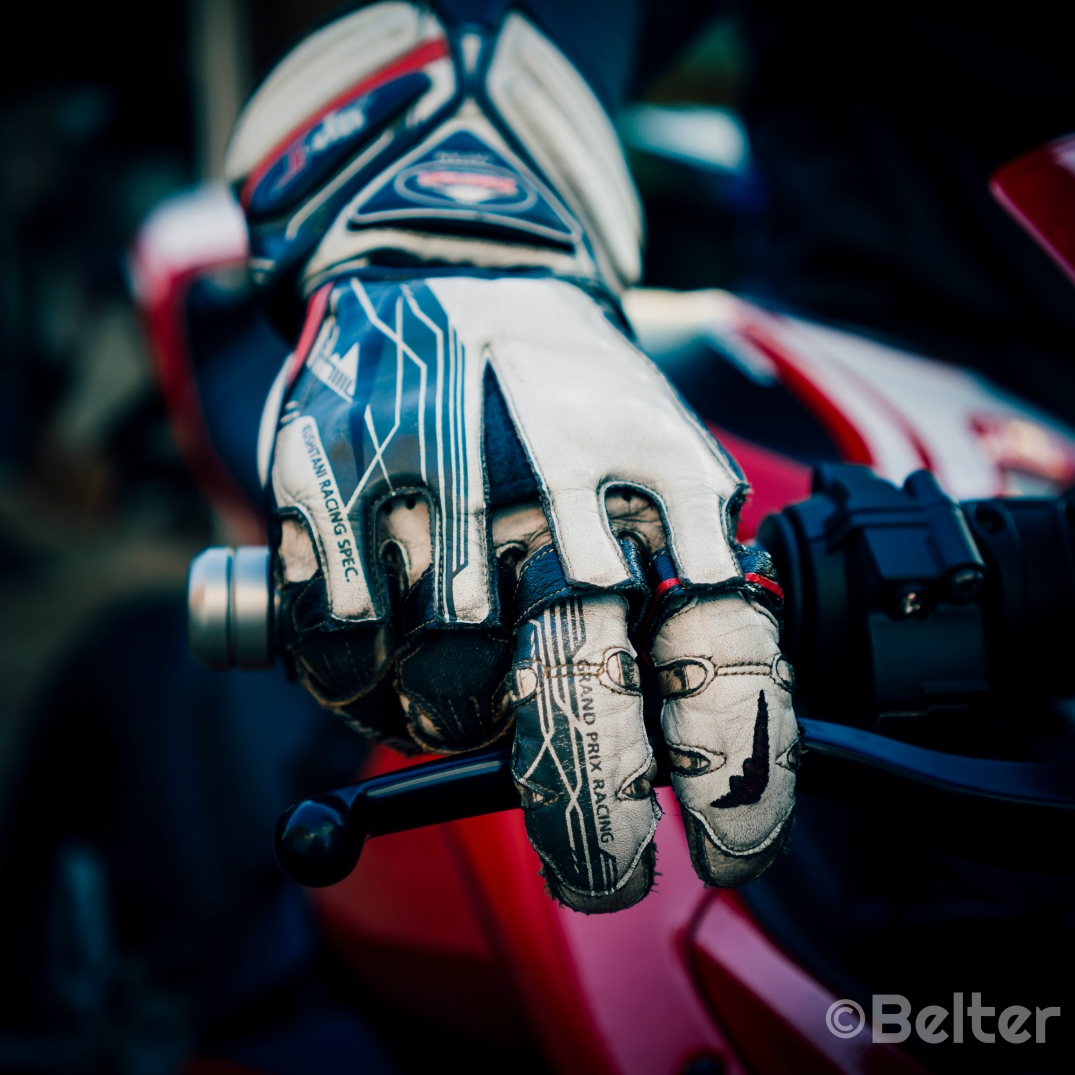